During his whole working life Dr.-Ing. Fritz Kießling has pushed and continuously improved the elaborate process to prove the flutter stability of sailplanes and small aircraft, which is a complex task in the development of a new airplane prototype. Always, his main objective was to develop experimental and numerical aeroelastic methods, which are practical and affordable for the community of commercial glider manufacturers, but also for homebuilders or the Akafliegs. Without his research efforts the impressive open-class gliders of today with large wing aspect ratio flying at high speeds are not thinkable. For establishing the flutter investigation process accredited by the German Airworthiness Authorities, the LBA, he worked together with the leading aeroelastic experts and all European glider manufacturers. 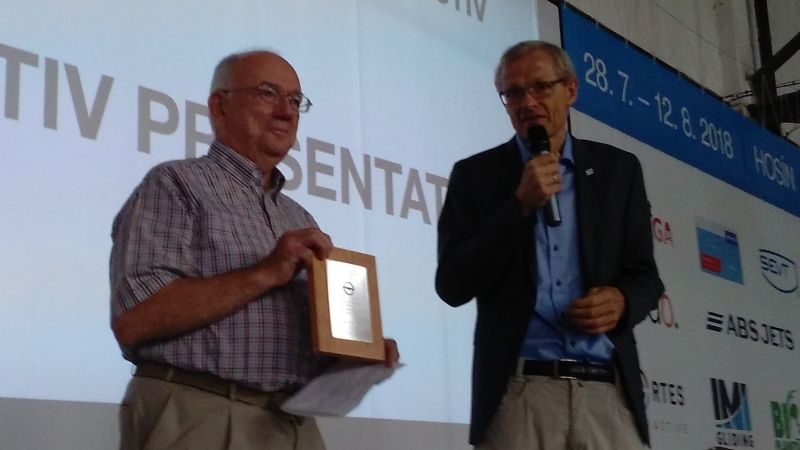 Fritz Kießling began his work in engineering as member of the Akademische Fliegergruppe Stuttgart. As a student he was a witness of the flutter accident of the fs23 Hidalgo, caused by flutter of the V-tail. To investigate the flutter behavior of the powered aircraft with a twin tail-boom, fs28 Avispa, he started to analyze eigenfrequencies and mode shapes of the airframe with numerical methods in his diploma with the title “Praktische Anwendung der Matrizenverschiebungsmethode auf die Schwingungsanalyse eines Versuchsflugzeugs” at a time, when no personal computers were available.

In 1971 he joined the Institute of Aeroelasticity of the Aerodynamische Versuchsanstalt Göttingen (today DLR), and studied the whirl-flutter stability of vertical take-off and landing aircraft and wind turbines. In 1984 he published his doctoral thesis ”Modellierung des aeroelastischen Gesamtsystems einer Windturbine mit Hilfe symbolischer Programmierung“ (Modeling of the aeroelastic complete system of a wind turbine using symbolic programming).

During these years Fritz Kießling began to investigate the aeroelastic verification process of gliders in collaboration with Norbert Niedbal. Also during this time, new open-class sailplane designs appeared as prototypes or in serial production using carbon fiber materials, that made high aspect ratio wings feasible. The Institute of Aeroelasticity therefore provided the research sailplane ASW15b, to uncover the flutter phenomena of aircraft. Since no affordable test equipment was available off the shelf, Fritz Kießling developed the mobile vibration test facility PRISMA (Phase Resonance Instrumentation for Structural Modal Analysis) during the years 1984-1986, which could be used to perform vibration tests of airframes on site. With this technical equipment he performed a large number of ground vibration tests in collaboration with Martin Rippl. The measured natural frequencies and mode shapes were fed into the flutter analysis software FLASTAB, which was programmed by Fritz Kießling as well. These in-house developments became the basis of the aeroelastic investigation of a large number of industrial designs of high-performance gliders during the 1980’s and 1990’s. This aeroelastic verification process is still applied today, while the test equipment has since been updated.

As the ground vibration tests were performed on the prototypes it was very costly for the manufacturers to modify the airframe to fulfill flutter requirements. To support the sailplane designers during the development phase Fritz Kießling together with Walter Stender summarized potential measures in the report “Maßnahmen gegen das aeroelastische Flattern von Segelflugzeugen und kleinen Motorflugzeugen” in 1989, which was translated to the report “Aeroelastic Flutter Prevention in Gliders and Small Aircraft” in 1991. This report is still the standard document for CS-22 and CS-23 aircraft recommend by EASA (European Aviation Safety Agency) to show compliance with aeroelastic airworthiness requirements.

During his active time at the DLR Institute of Aeroelasticity Fritz Kießling initiated numerous collaborations with international partners (e.g. Polish ILOT and Czech VZLU) to standardize the flutter analysis methods on light aircraft and to enhance safety during the flight testing phase of new aircraft. After his retirement from DLR he is still an active member within the aeroelasticity community, and acts as a senior adviser and expert in this field.