Early in February, the sad message was spread that Mr. Cedric Vernon had passed away. Our thoughts are with his family and his relatives, our deepest sympathy is with them all. 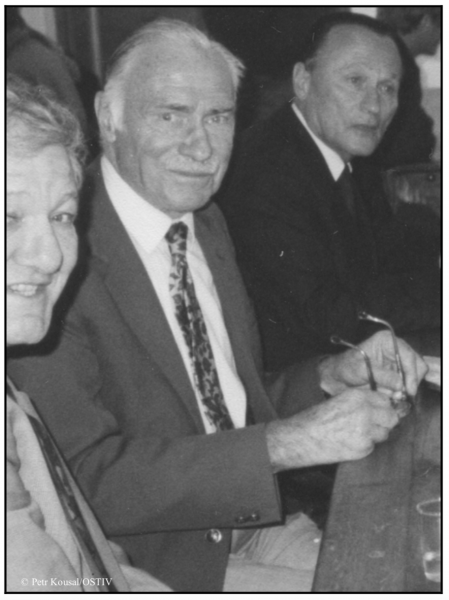 Cedric Vernon dedicated his whole life to aviation, long years during his professional life in industry, later on at the Civil Aviation Authority (CAA) UK, and during his retirement by sharing his rich experience with OSTIV, which he joined early during the 1950s.

The world of gliding owes very much to him, last but not least due to his engagement in working out the European Airworthiness Requirements for Sailplanes and Powered Sailplanes, JAR-22, reflecting in their clear wording Cedric’s clean layout and penmanship.

He started his career when he joined the Handley Page Aircraft Company as an apprentice in 1931 and remained with them until 1970 when the Company was closed down. From 1952 to 1968 Cedric was their Chief Aerodynamicist. Among many other aircraft, he worked on the "Halifax" and the "Victor", a jet-engined bomber, first flown in 1952, staying in service with the RAF till 1993, lastly flown as a tanker aircraft.

In 1970, aged 56, he changed to the Air Registration Board (ARB), although this meant that he and his wife Nora had to relocate from Hertfordshire to Surrey. Shortly after, in 1971, the ARB was absorbed into the newly formed Civil Aviation Authority (CAA). Cedric became an employee of the CAA and, from 1976 till 1980, was delegated as CAA representative to the JAR-22 Study Group. He finally retired from the CAA in 1980 but nevertheless carried on working tirelessly for aviation.

The fact that he was affiliated with glider aviation may be recognized by Cedric Vernon’s various activities in this field. He had been a member of the London Gliding Club at Dunstable for over 50 years, he had also been a member of the BGA Technical Committee and was involved in the preparation of BCAR Section E on glider airworthiness, and he worked as Secretary of the OSTIV Sailplane Development Panel and of the JAR22 Study Group. His 1000 hours of gliding included test flying.

Cedric gained many honours for his invaluable work, since his outstanding skills were early recognized. The list of awards he received include:

Cedric Vernon’s active role with OSTIV is reflected by various technical papers, pointing out his outstanding ability to transform technical coherence into concisely precise wording. Being a true British gentleman, he altruistically made this talent available to OSTIV and to the JAR-22 Study Group. The Airworthiness Requirements, he provided with conciseness and clarity, were adopted by the European Aviation Safety Agency (EASA) as the pan-European applicable code CS-22.

Cedric, before he passed away, donated his full collection of OSTIV literature to the new National Aeronautical Library at Farnborough, UK.

Together with his wife Nora – they had married in 1940 – he had two children, a son, Robin and a daughter, Diana. There are four grandchildren and two great-grandchildren.

Responses to the sad message mirror the great appreciation Cedric received by his friends:

“In our sadness about the loss of Cedric Vernon, we can best gratefully remember his tremendous contributions over so many years to the SDP, OSTIV and indeed the World of Gliding. But we also miss a good friend. May his remembrance inspire us to continue in the same way.”

Cedric Vernon peacefully passed away on 9 February 2008 in the fold of his family.

This memorium was prepared by Helmut Fendt with the contributions of Roger Forder and many OSTIV friends who had the privilege to know Cedric Vernon. Translation kindly prepared by Anthony M. Segal.