A life for gliding and atmospheric physics 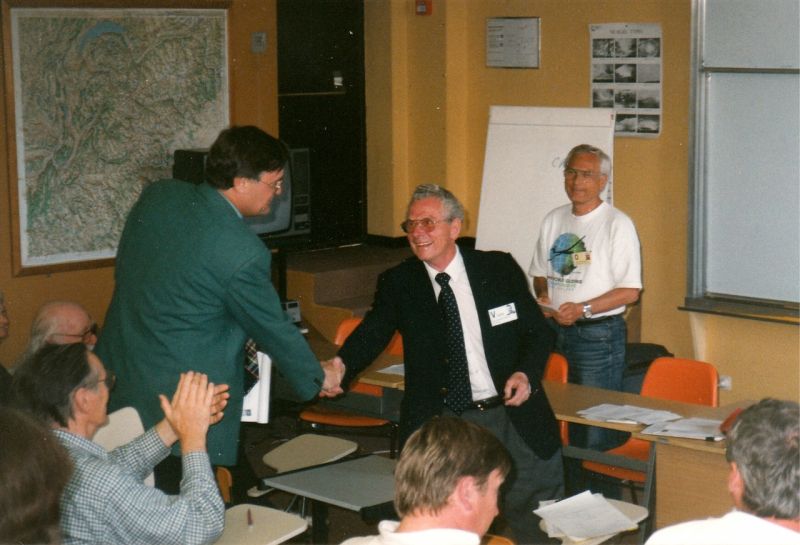 The eyes on this picture of Dr. Manfred E. Reinhardt reflect his brightness and scientific curiosity, and the resulting enormous knowledge about “Segelflug und seinen Kraftquellen im Luftmeer” (Gliding and its power in the atmosphere) - quote: Prof. Dr. Walter Georgii; photo: Ute Löb).

His fairness and neutrality gave him worldwide recognition, enhanced by his long-standing position as President of OSTIV, “Organisation Scientific et Technique Internationale du Vol à Voile” (International Organization for the Science and Technology of Soaring), the indispensable advisory body of the International Gliding Commission of the FAI.

The first OSTIV aerological measurement campaign (1985) in the Himalayas with Joachim Kuettner, Alvaro de Orleans-Borbon and his Valentin “Taifun” as flying laboratory, and Bruno Neininger, with his mobile measurement system, took place during his presidency. From 1962 Manfred Reinhardt laid the foundation as director and later co-director of the Flight Physics section, which is now the widely recognized Institute for Physic of the Atmosphere (IPA) of the German Aerospace Center DLR in Oberpfaffenhofen, in no small part due to his leadership in developing the aircraft used for atmospheric research, from motorgliders to the Falcon jet used for the famous flights in the ash clouds of volcanoes.

Bruno Neininger said of Manfred, “…..his enthusiasm for measurements and observation from aircraft was always a shining example. With Joachim Kuettner and other researchers, Manfred Reinhardt was for us young scientists at that time, an appealing source of inspiration for the meteorology and physics of the atmosphere. I admire him for his optimism in the scientific work up to an advanced age.”

And from Alvaro de Orleans-Borbon, who “admired Manfred Reinhardt for his lack of boundaries between “big” and “small” science:  he was equally happy using a highly instrumented Falcon or a hand-held psychrometer. To me he embodies the kind of man and scientist that is becoming exceedingly rare in our current times – thinking of him, a “Renaissance person” comes to my mind. He impressed me with his unique humanity: I saw him explaining weather concepts to Nepalese children and their attentive wide eyes when they posed all kinds of questions to him.”

He served as team captain and meteorologist at five world championships. Even after retirement, his worldwide contacts with the main scientists in the physics of the atmospheric sought out his knowledge and advice. And he put a great deal of effort into storing documents of all kinds on the history of gliding in Germany and in the world, as well as all kinds of atmospheric influences and research results which have become a basis of the statistics on climate change.

With Dr. Manfred Reinhardt the scientists on the Physics of the Atmosphere and the soaring world has lost a great man, a never tired researcher and an active promotor of good sporting behavior who always put the others in the first row. Thank you, Manfred, for all you gave us!