Paul B. MacCready, a renown aviation pioneer, died in his sleep on Tuesday, 28 August 2007, in Pasadena, California. He was 81. Our condolences are extended to his family, associates and friends.

His death was announced by AeroVironment Inc. (AV) , the company Dr. MacCready founded and led until 20 August 2007 when he was diagnosed with a serious illness and resigned as AV Chairman. 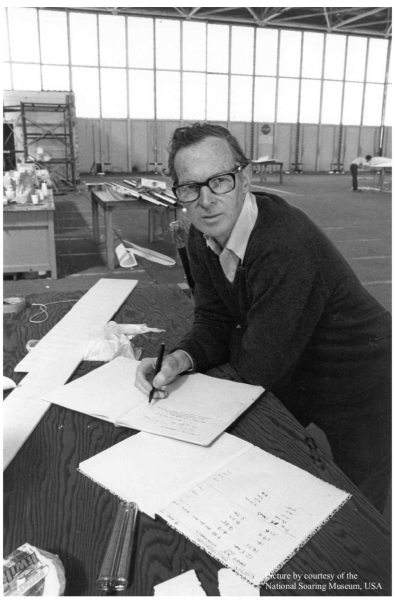 MacCready was born in New Haven, Connecticut on 25 September 1925, the brother of two older sisters. His father was a doctor in private practice and his mother a nurse, although she was not working when he was born.

His interest in flying came from initial involvement studying bugs, especially butterflies and moths which he collected. That led to model airplanes, building all sorts of craft such as pow- ered airplanes, gliders, rubber-band powered indoor craft and experimental models such as

helicopters, autogyros and ornithopters. He flew models competitively prior to WW II, includ- ing a nationals in Chicago, Illinois in which he was a top-scorer in the under age 16 class.

After graduating from a private school, Hopkins, in New Haven, he attended Yale for a short time before a stint in the US Navy V5 pilot flight training program which he left 3 months be- fore receiving his Navy Pilot wings to return to Yale from which he graduated in 1947 with a degree in Physics. While at Yale he purchased a Buhl Pup, a very small, under-powered air- plane which he flew extensively, including from home in Connecticut to Chicago and back. He became involved in soaring, which he needed to utilize to gain any altitude in the summer with his airplane, so that experience was a good background for flying the war surplus Pratt- Read (PR) glider he purchased. This led to visits to Elmira, NY, which claimed to be the soar- ing capital, with another Connecticut resident, Parker Leonard (one of the designers of the PR), where he met many of the then luminaries of soaring such as John Robinson. MacCready later married Leonard's daughter.

He acquired a unique glider, called the Screaming Wiener which he flew in the 1947 National Contest in Texas, taking 2nd place, a rather remarkable achievement since it didn'quote to have much performance. Then he got a Polish Orlik which he flew in the 1948 Nationals, win- ning the contest, and winning again in 1949. In 1953, he won again , with a borrowed ship. His first venture onto the international scene was in 1950 (Orebro, Sweden) where he won second place, continuing in 1952 (Madrid, Spain- 6th place), 1954 (Buxton, England - 4th) and 1956 (St. Yan, France) where he won, becoming the first from the United States to be World Gliding Champion.

MacCready had come to Cal Tech in Pasadena from Yale to pursue graduate study, and did a fair bit of wave flying/exploration which was good background for his PhD thesis: Investigaion of Atmospheric Turbulence - 1952. Previously, he had completed his Masters at Cal Tech in Physics. He became involved in hanggliding for a few of its early years, (1970s) not so much flying himself, but supporting his two young sons including a small hangglider the three of them built.

His interest in weather leading to his PhD had begun in the late 40s when he became involved in weather modification. He formed Meteorology Research Inc. in 1951, being the only em- ployee at first, until he gradually expanded its workforce as consulting contracts came along in the 50s regarding weather modification. He became a consultant to President Eisenhower's Advisory Committee on Weather Control in the mid-50s. The interest was greatly in cloud- seeding to produce rain for agricultural purposes. But the political repercussions of rain that might fall where it wasn't wanted were too great for the projects to become feasible and the company moved on to other projects such as instrumentation and other environmental work. One of MRI's employees was Dr. Harner Selvidge, a meteorologist also well-known in glid- ing, having been SSA President, who served as MRI ExecVP, acting as company manager. He left MRI a couple of years prior to when MacCready left in 1970, having sold it 5 years earlier to Cohu Electronics.

AeroVironment (AV) was started in 1971, again as a one-man operation, but quickly taking on Peter Lissaman and Ivar Tombach. They received financial support from a cement com- pany! AV became involved with acoustic radar, (sodar), designing, manufacturing and selling the equipment which is used to assess some important characteristics of the lower levels of the atmosphere. Other areas of study included things as diverse as aircraft wake turbulence and freeway pollution.

The building of the Gossamer Condor was prompted because MacCready had no way to pay off a $100,000 loan he had guaranteed, so the Kremer prize of that amount fit his needs perfectly. Besides realizing that the chance of winning greatly depended on long wingspan and lightness, and not to belittle his developed and continuing insight leading to the final design, his success was probably due to his understanding that the ship needed to be easy to quickly repair after the many crashes that would occur during the flight testing phase; others vying for the prize had very complex construction which took months to repair after a crash. So, 18 years after first offered, the Condor, piloted by Bryan Allen, performed the figure-eight flight around pylons one/half mile apart, winning the challenge prize in 1976.

Three years later MacCready's team won the Kremer prize for a flight across the English Channel with the Gossamer Albatross, a much cleaned-up version of Condor, providing enough money for him to finally pay off his debt.

Next came the Gossamer Penguin airplane, utilizing photovoltaic cells generating electric power for an electric engine-powered propeller for human piloted, solar-powered flight. It was sponsored by DuPont (who also sponsored Albatross to give publicity to solar power. This led to the Solar Challenger which flew from Paris to the Manston RAF field in England in 1981, piloted by Stephen Ptacek. The ship weighed only 100 lbs, with the solar cells, wiring, engine and propeller adding another 100 lbs.

Lots of government contract work with solar powered craft led to the Helios project, which was the 247 ft wingspan ship with 14 propellers that flew to an altitude of 96,863 ft. AV's so- lar work has led to various projects for non-aero use that MacCready wouldn't readily talk about, even though they were not classified activites. But he was a great believer in battery- powered cars, even more so than fuel cell (hydrogen) ones. AV worked with General Motors on an electric battery-powered car design, the Impact, which led to the GM EV1.

MacCready became very conscious of energy use and propounded, wherever he was asked to speak, on the need for more environmentally friendly relations between the environment and technology, pushing himself, AV and others in that direction ever since 1982 when he re- ceived the Lindbergh Award for his contributions thereto.

Some of the many, many awards received by MacCready:

Papers regarding soaring given by MacCready:

One of MacCready's daydreams involved nature's largest flying creation, the Pterodactyl, the largest creature that ever took to the air, which disappeared with the dinosaurs 65 million years ago. A bio would not be complete without mentioning that in 1986, a MacCready-in- spired, wing-flapping, computer-brained, radio-controlled and astonishingly realistic replica of the prehistoric pterodactyl was photographed as it swept over Death Valley, California, for the Smithsonian Institution's IMAX film On the Wing.

Finally, we take note of the MacCready Speed-To-Fly (S2F) Ring, developed by him; use of the concept is credited by some as one of the reasons for his successful contest flying before S2F was more widely recognized. It is the technique used flying between sources of lift to maximize the average cross-country speed by optimizing the airspeed in the air that is found between the areas of rising air. Although the S2F concept was described and discussed by oth- ers, MacCready certainly invented the 'ring', which allowed an easy indication in flight of the optimal speed to fly.

This memorium was prepared by Bernald S. Smith mostly from available material and personal knowledge.