Piero Morelli loved gliding - and he lived for this passion. Working as a Professor for Flight Dynamics at the Politecnico di Torino, Piero excelled in blending scientific theory with practical application. 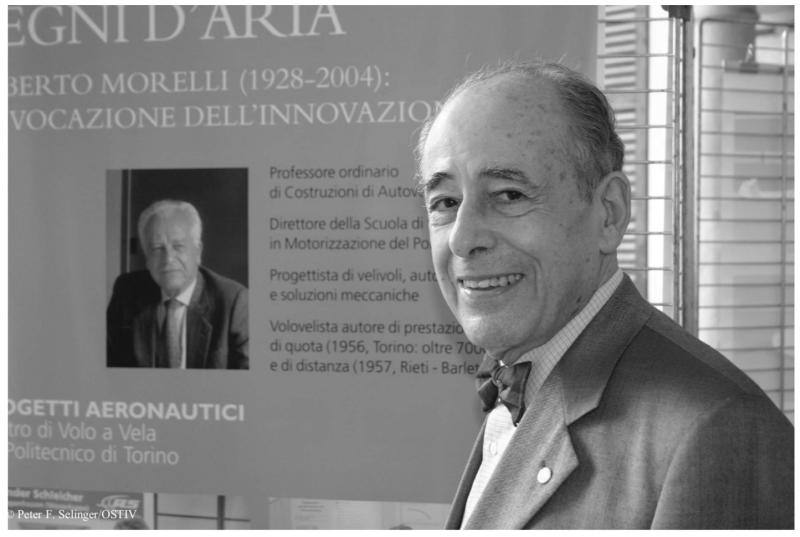 His passion developed early. In the year 1952, Piero Morelli founded the "Centro di Volo a Vela del Politecnico di Torino" (Center for Gliding at the University of Torino), becoming its first president, until 1958.

Together with his brother Alberto, he designed several prototypes of sailplanes, whose markings indicated the origin from the Centro di Volo (CVT). The brothers greatest success in design was the M-100, a single seater, wooden sailplane with 15 m wingspan and modified NACA laminar flow airfoil, from which approx. 200 serial-numbers of a modified version were produced.

From 1958 until 1969, Piero Morelli participated in several national gliding contests. In 1961 he was the first Italian pilot to achieve two diamonds on the gold badge.

His legacy reflects in his publications, showing a broad technical knowledge and competence, linked with a visionary foresight of future development in gliding and in design of light aeroplanes.

He issued many technical essays about gliding, his book on "Static Stability and Control of Sailplanes", published in 1976, is still up to date.

Piero was honoured many times for his efforts. A short list of the awards he received include:

Perhaps Piero's most significant contribution to gliding was his never-ending support for various international gliding groups. Piero Morelli attended to the "Academic Flightgroups" - several times he visited the symposia and the scientific flying camps at Aalen- Elchingen/Germany - as well as to powered sailplane meetings and competitions at Burg Feuerstein/Bavaria.

His outstanding participation and personal commitment could be seen with OSTIV. In the year 1976, he took over the chair of the OSTIV SDP from General C.W.A. Oyens.

Piero Morelli had chaired the OSTIV SDP for 22 years, when he passed on this important post to Dr. Michael Rehmet in 1998.

Perfect in form, polite and always in a respectable manner, he acted as chairman of the OSTIV SDP. The Airworthiness Code "OSTIV Airworthiness Requirements for Sailplanes", being an international standard for the certification of sailplanes, he kept up to date by constantly introducing actual technical expertise. As designer exponent, in 1976, he hired Dipl.-Ing. Gerhard Waibel - after he had assured that Waibel had no shares in the company he was working for.

Piero Morelli's utmost concern was the preparation of new opportunities for gliding. Concerned about the increasing performance of the gliders and the accelerating costs for their acquisition and operation, he concluded to promote a new World Class that could make gliding less expensive. In September 1990, the 1st meeting of the FAI World Class Judging Panel took place in Paris.

Piero Morelli held tight to his concept of an affordable World Class glider. He supervised the benchmarking of prototypes performed at the gliding field in Oerlinghausen, Germany. The Polish sailplane PW-5 became the winner of the competition and in 1994 the "World Class" was launched by FAI. A World Class world championship competition was subsequently authorized by the FAI.

Another vision to exploit new resources for glider aviation was his project to make light and microlight sailplanes attractive for competitions. Together with friends at the OSTIV SDP he developed ideas for the technical framework of a new competition class . Regrettably, he was not allowed to draw his plans to a close because of his passing.

On January 2, 2008, aged 83, Piero Morelli passed away quietly at his hometown Torino.

This memorium was prepared by Helmut Fendt with the contributions of many OSTIV friends who had the privilege to know Piero Morelli. Translation kindly prepared by Larry L. Sanderson.